In this article, I am going to talk about my first international congress which is the 3r d International Genetics and Bioengineering Student Congress held at Yeditepe University. The event started with the presentation of Professor Dr. Sonia Rocha from the University of Liverpool. The topic of her speech was chromatin as an oxygen sensor component of the cell. We all know oxygen is an essential component of life. In our bodies, every cell has a different oxygen level and cells mostly try to restore oxygen availability. HIF is a factor to simply detect the low oxygen concentration in the cell. It needs two subunits to activate; HIF alfa and HIF-1 beta. HIF controls many pathways such as cell growth, oxygen supply, transcription, and cell death. Also, PHDs and FIH are considered molecular oxygen sensors in the cell. Chromatin is the solution for keeping huge genetic material in a small place. Sometimes chromatin structure changes according to the cells’ needs. This can happen in three ways; ATP dependent chromatin remodelers, post-translation modifications, and lastly JmjC histone demethylases. They all need oxygen as a cofactor for an enzyme. Hypoxia in cells leads to an increase in histone methylation. As a conclusion, chromatin can act as an oxygen sensor with the changes in its structure due to methylation.

The second speaker was Prof. Ian Bars from London Natural History Museum. His topic was a little bit interesting than others because it is not only about genetics. It is also about linguistics, history, and anthropology. As you guess he talked about ancient DNA. In the late 1980s to mid-2010s PCR technology is used to reveal aDNA. It provides only 100-1000 bases to the scientists. However, after the next-generation-sequencing (NGS) showed up billions of DNA base pairs were able to be read. But still, scientists face problems while working with ancient DNA. For example, fragments are short to assembly the genome or most of the genome belongs to the bacteria. Of course, if there is a problem, a solution exists too. The shortness of fragment can be solved by working with species that have a reference genome. The other problem can be handled by reducing the bacterial DNA. Because of the chemical process while DNA extraction, DNA decays after time. Therefore it is important to be DNA is well protected in the past. DNA is protected the most in the petrous bone which is located in our inner ear.

The third speaker was Prof. Sir Tom Blundell. He is currently a professor in the Department of Biochemistry at Cambridge University. He talked about genomics, structural biology, and fragment-based drug design. In 1969 he was in the team of Dorothy Hodgkin to solve the protein structure of insulin. He included some advice in his speech that Dorothy Hodgkin told him, “Good science requires a long vision.’’ and “Good science is done in the industry.’’ He studied in Pepsin and Renin first. He used the predicted ancestor of Pepsin and Renin, tried to create a new medicine by using the enzyme in HIV. RNA of HIV gives a polyprotein and by cutting up this protein they found out a protein that activates the virus. This worked! Two poly protein come together and by stopping the enzyme AIDS is stopped. He also stated that in his lab rotary they are using both statistical potentials (SDM) and machine learning methods (mCSM) for their studies. Speech has finished by another piece of advice from Dorothy Hodgkin “Knowledge exchange is important’’. So, Prof. Sir Tom Blundell’s laboratory consists of members Fromm all over the world from various countries. 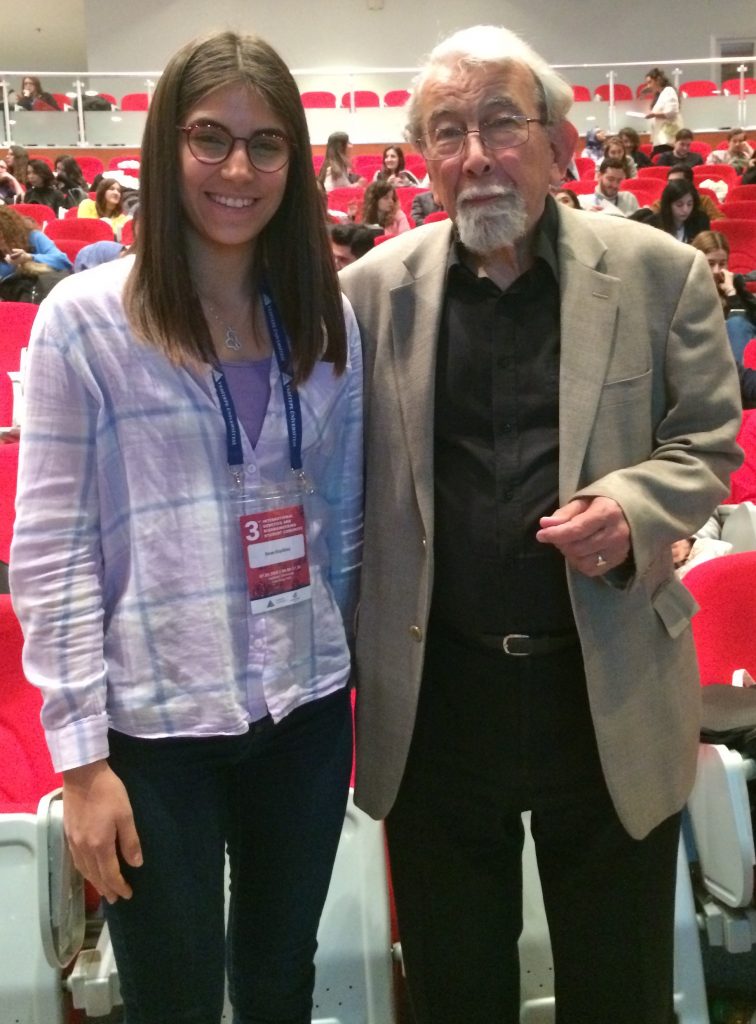 The fourth speaker was Prof. Dr. Sreeparna Banerjee from Middle East Technical University. Her topic was short chain fatty acids in the regulation of signaling the gut. We have more bacteria in our system than our cells. If you have a misbalance in your gut, it leads to several diseases. Bacteria come from the stomach into your gut. These bacteria digest some nutritions. The bacteria give agents as ATP. SCFA are soluble, they enhance proliferation and can increase the expression of some genes. So, they used butyrate to detect down-up regulated sequences and tried to find out a relationship between these sequences and diseases like colon cancer.

Because this is first international congress that I attended I had some difficulties in understanding several subjects but I believe that I comprehended the main parts of the speeches and was able to explain to you. It was such a wonderful experience to attend an event like this and I am looking forward to joining more of them. See you in my next article.

About the Author: Deren Büyüktaş

This site uses Akismet to reduce spam. Learn how your comment data is processed.